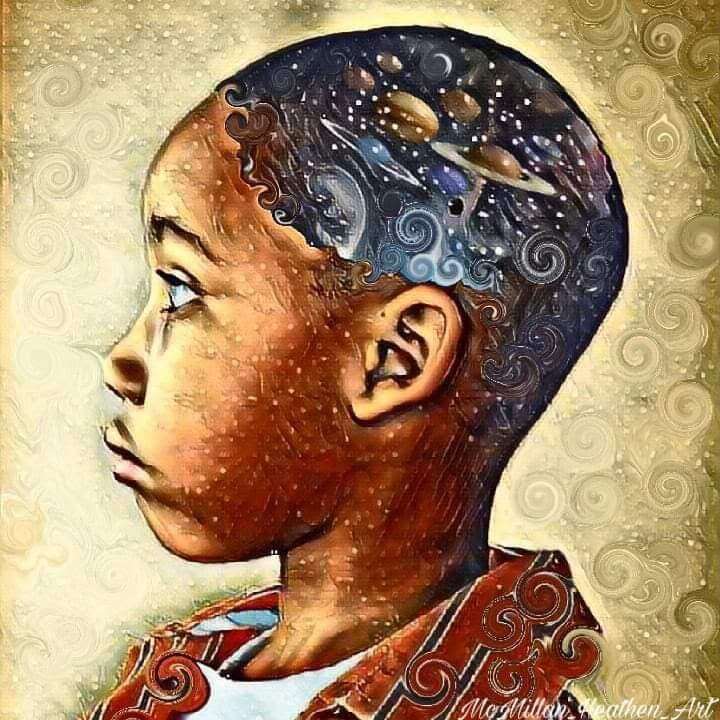 This is the first post for the segment “Artist Portrait” in which I’d like to introduce you to a new perspective. This time I am collaborating with Garry Mcmillan, a very talented artist, located in the United States. We’re gonna talk about him, his art, what he’s rooting for and what he’s protesting against.

D I S C L A I M E R
Interviews might get political sometimes. This does not mean I necessarily agree with every opinion I share on my platform. As long as someone’s opinion isn’t spreading hate towards any specific group of people, I am open to listening and sharing.

First, Art
Galaxies ahead of you ” He is a young, beautiful, intelligent mind, and he has the drive and determination, he is respectful, creative, confident and when he reaches for the stars, he knows he will end up in galaxies far beyond a person could imagine.  He is all those things, and even more, he just happens to have beautiful brown sugar skin and from African descent, and he is proud of that. That is one of the many things that makes him who he is, he will rise, and he will succeed! ”

How do you see your own artwork?
“I definitely feel that I have my own unique quality to it, and I feel each piece that I put out is a representation of me and a piece of myself.”

Do you remember why you started making art?
“My best friend of 20 years passing away is definitely a big factor. It [art] brought something in me to life that wasn’t there before. It has helped me through some really tough mental and emotional moments.”

We have collaborated on “Art In Protest | The Dissection Of Trump“, what do you think of Trump? Why do you think he acts like he does?
“Honestly, think he is a disrespectful narcissist who has taken advantage of his white privilege and hasn’t ever had to deal with any consequences in life due to his horrible decision making.”

Are you afraid he might be chosen again? What do you think of politics in America?
“Common sense tells me that he shouldn’t be re-elected but there is a part of me still trying to figure out how he got elected in the first place. So, i think he could be re-elected but I’m definitely hoping he is not. I think politics in america are a bunch of beautiful lies that are layered by cracks of corruption.”

Are there any protests in your area? How do you feel about it?
“Yes, there have been BLM protests, and surprisingly my city of Hot Springs Arkansas has stayed positive, and the citizens have really showed up and stuck up for a problem that has been going on for over 400 years and longer, and really made it a big deal!”

One small change is to continue to inform people of how horrible of a person he really is, and the people he keeps around him. Not only to make this nation better but also make the world around us a better place to live peacefully together. Not only to have a better president for the U.S. but better dictators around the world.”

What are you rooting for?
“I am rooting for equality for all people regardless of gender, race, sexual orientation, and religion. One big change is voting the right people into office that will fight for equality. One small change is that we keep protesting!

Also protesting with art, when I read what you were doing with this project it made me so interested in doing it! A lot of people have a lot to say with their gift of art and I think for some it’s just a way to speak out! Not only am I for equality in America, but for equality for the entire world!”

Thank you so much for sharing your perspective.

More of Garry’s art and their captions
” Her glow– Me finding my wife’s beauty as she was growing our youngest child inside her and everything that comes with growing a human being. ”

Find our collaboration Mother Earth to see the poetry written to this beautiful piece of art.